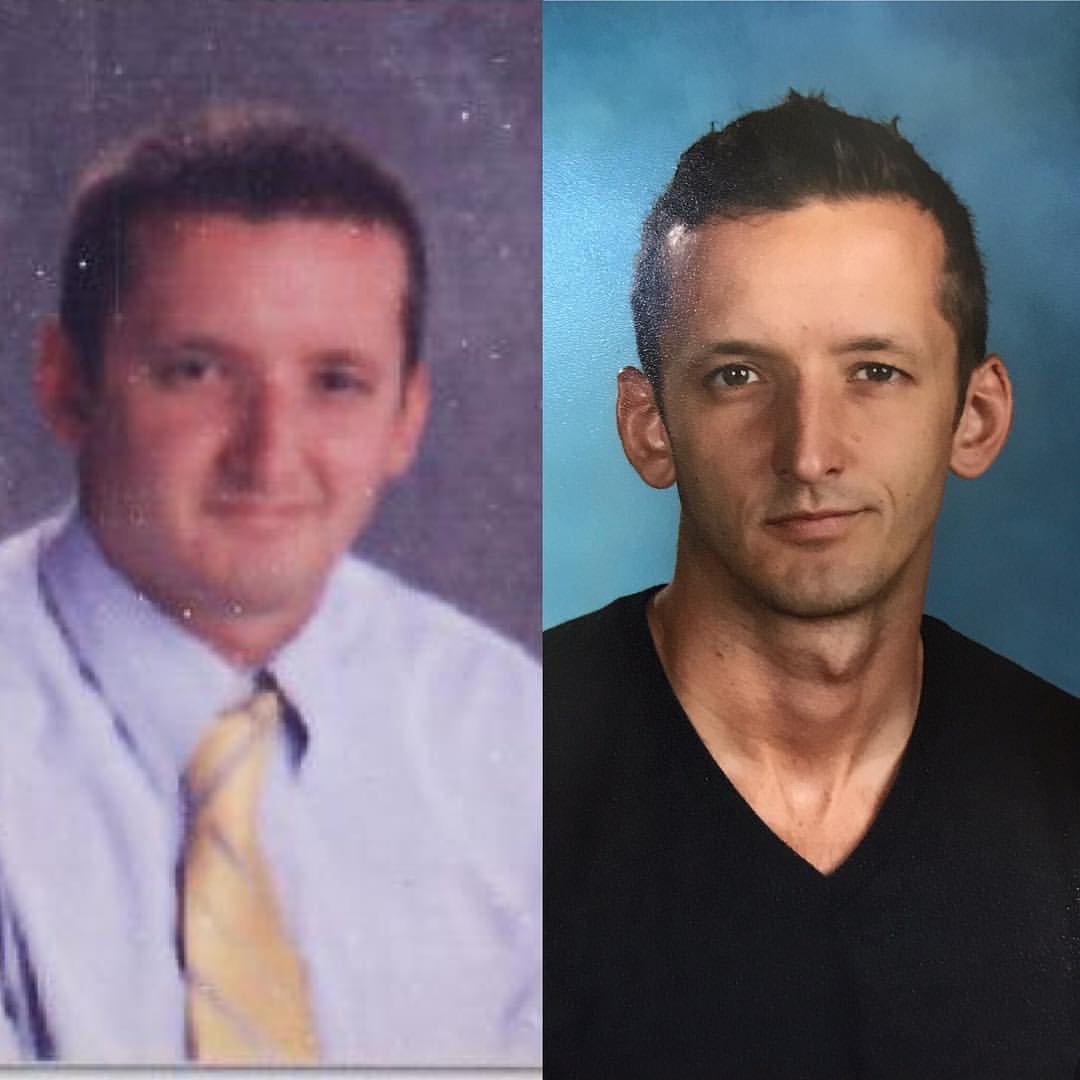 I told you it’s worth it. Here’s proof.

Today I received two incredible confirmations in the form of photos from our nutrition coaching students. I had to share them with you.

My friend Kyle is a middle school math teacher who is passionate about achieving his personal best.

Tamara used her competitive nature to fuel her progress, challenging her circle of friends to a weight loss challenge. They put their money where their mouth is and she crushed it. She may have had a slight unfair advantage 😉 #E4A

Get some great sleep tonight. I have an incredible story to tell you tomorrow.

The inconvenience of cooking is worth it

Research shows that people who cook at home are healthier than those who eat out more often.

While more adults say they are too busy to cook, I suggest that we have more advantage and time saving technology than ever before in history.

My kitchen is outfitted with devices to help me cook more frequently with less effort. Consider adding a crock pot, a pressure cooker, a rice pot, and an electric kettle to your home. These do their job without supervision, which allows you to continue being busy 🙂

Have a great morning.

I like a good glass of wine as much as the next person, but we have to seek some truth about what our alcohol intake really means.

I used to keep a photos of body inspiration on my telephone. I don’t do that anymore unless they are photos of my own body. It’s unhealthy to aspire to “have her legs” or his arms.

What’s worse, is I used to keep a photo of a sculpture of spider-man for body comparison. That’s worse because it’s not even on the human spectrum, much less my own genetic spectrum.

Comparing myself to a fictional character was super unhealthy and unattainable. END_OF_DOCUMENT_TOKEN_TO_BE_REPLACED

Back around 2008, my team and I started hosting annual retreats in South Beach. There was yoga, meditation, boot camps, great food and of course parties.  That’s when I first met Aisha.

Since that time a lot has happened.  Though I’m sure there were some trying times, but through the work she’s done, and finding her passion for climbing she’s achieved incredible progress.

Her story is inspiring.  Check it out, in her words… END_OF_DOCUMENT_TOKEN_TO_BE_REPLACED

On Activity: Be Plastic-Man AND He-Man

When I was a kid I had a bunch of different action figures.

The star wars figures came in 12″ tall or 4″ tall. In either case they could only move at the shoulders and waist. The GI Joe figures were way better as they had elbows and knees, as well they could tilt their head and rotate their wrist.

The two standout action figures which will bring me to my point, trust me, were Stretch Armstrong and He-Man.

Stretch Armstrong was, as you can imagine, super flexible. You could bend him into a pretzel shape if you wanted to. He-Man had all the muscle in the action figure world, but like the star wars guys, he was super rigid and couldn’t bend at the knee or elbows.
END_OF_DOCUMENT_TOKEN_TO_BE_REPLACED

Surround yourself with real food.

It’s simple, and it’s effective. Try not to make it any harder than that.

By real food, I mean things that grow out of the ground, would spoil if not refrigerated, or that has a short shelf life and isn’t intended for refrigeration (like say tomatoes, and bananas).

To really give yourself the biggest advantage, work to displace anything that doesn’t fit that description by filling the space with the real deal.
END_OF_DOCUMENT_TOKEN_TO_BE_REPLACED

Meditation vs Our Breakfast Routine

If you’re living the E4A habits, then there are a few practices which you may often find in conflict with each other.

Of those, two habits, the practice of which are locked in a death-match for the ages are:

Both of these incredibly powerful habits are powerful positive influences on our progress, and they are both key to our success. However, they also both compete for our attention during the first time slot of the day.

Here’s a note from Dara, one of our Premier Coaching students:

“Tomorrow we need to discuss how to get food in within 30 min if I am doing 20 min meditation. I tend to try to get a daily meditation in during the evenings not in the AM.”
END_OF_DOCUMENT_TOKEN_TO_BE_REPLACED

Holiday weekends are a virtual obstacle course when it comes to staying on track with our body goals.

The good thing is you didn’t invent the problem so there are solution sets already tried and proven. We just have to figure out which ones are the best matches for us.

I once read about WWE wrestler Triple H, who as a WWE superstar traveled over 280 days out of the year. Thats 5 days out of every week and some weeks 6 or 7 days!
END_OF_DOCUMENT_TOKEN_TO_BE_REPLACED

I had a talk yesterday with a friend of mine who recently began her own wellness journey.

By her own admission, she’s neglected her health for a long time, and for health reasons, her goal is to lose over a hundred pounds.

My goal in speaking with her was to hear the guidance she was receiving, and to make myself available in case she had any specific questions.

Coming from a place where losing over 100 pounds is a real possibility means that there are likely basic understandings that, when established, can go a long way.
END_OF_DOCUMENT_TOKEN_TO_BE_REPLACED

Built on life-changing nutrition, “death defying” training, science (you shouldn’t need an adjective for science) and supported by world-class coaches, The Ultimate Nutrition Course is about to jump to a new level.

Our new members platform will make your journey to healthy, lean and strong living more accessible and simpler to attain.

If you receive our emails you know that we’ve been working on upgrades to the way we guide student through The Ultimate Nutrition Course.

I spent this weekend on the sidelines of soccer fields trying NOT to coach my younger son’s team during their 4 game tournament. (Sub-text: Parents on the sidelines should be careful not be critical during games. And SUB-sub-text, there was no sleeping in this weekend.)

On the sidelines of every child’s sporting events are supportive parents. Many have more than one child so I know they’re busy people. Kudos to all the parents who sacrifice that time for their kid’s development.

But now I have to talk about us.

We need to work on how we’re fueling our athletes. We make sure they do their homework, get to bed on time, and make it to every practice and game. Then it’s our turn to supply snacks for our athletes, and what do we see? Someone stops at Duncan Donuts on the way to the game and plops two dozen in the team huddle.

What are we doing?
END_OF_DOCUMENT_TOKEN_TO_BE_REPLACED

For maximum impact, give it away

That’s what my friend’s wife told me, bag of chips in hand, as I walked by, and it’s stuck ever since. Of course I’m talking about kale chips, keep that in mind 😉 YES I took one, who can say no to something like that?

Angie and Yankee are from Trinidad, where they were indoctrinated with that phrase for as long as they could remember. This was the first time I’d ever heard it and it’s stuck with me for two reasons:

It’s simple, and it’s about generosity. It’s incredibly wise, and whoever made it up should be very proud. END_OF_DOCUMENT_TOKEN_TO_BE_REPLACED

I played a bunch of organized sports when I was growing up. As a result I’ve had the opportunity to several develop key relationships, and really understand and value the title “Coach.”

One time, I’ll never forget, a guy was late to basketball practice, and Coach Bills’ practice at the time was (and if you ask me, still should be) that if someone wasn’t accounted for, the team was going to suffer. So if Johnny was late, didn’t call ahead, or didn’t send a note with a friend, the team would be running until he showed up.

Nowadays (in my grumpy old man voice) I see parents pulling up to the soccer game 5 minutes before start and the kid has missed warmups and is walking, not running, tot he side of the field …but I digress.

So one of my teammates was 10 minutes late and the team was running sprints as a result, giving him all the heat we could with dirty looks as he walked in. When he came in he must have said said something to the effect of ” It was just 10 minutes, coach!” which COMPLETELY set Coach Bills off. END_OF_DOCUMENT_TOKEN_TO_BE_REPLACED

Part 2: The Power of Thinking Bigger

Almost 2 weeks ago, E4A student Kyle Gurkovich attempted to set the world record for most pull-ups in 24 hours for a third time.

For months leading up to the event, he planned and prepared.

END_OF_DOCUMENT_TOKEN_TO_BE_REPLACED

The power of thinking bigger

I’m fresh off the plane from Tampa, having had my first few days completely off in a while. My daughter just successfully ended a 4 year run at University of Tampa, achieving the Dean’s list and graduating with honors and completing the honors program in the School of Business.

We are all very proud of her and her effort.

After all of the pomp and circumstance I was able to steal away some time and have a conversation of HUGE importance with her, on the topic of owning things vs things owning us.
END_OF_DOCUMENT_TOKEN_TO_BE_REPLACED