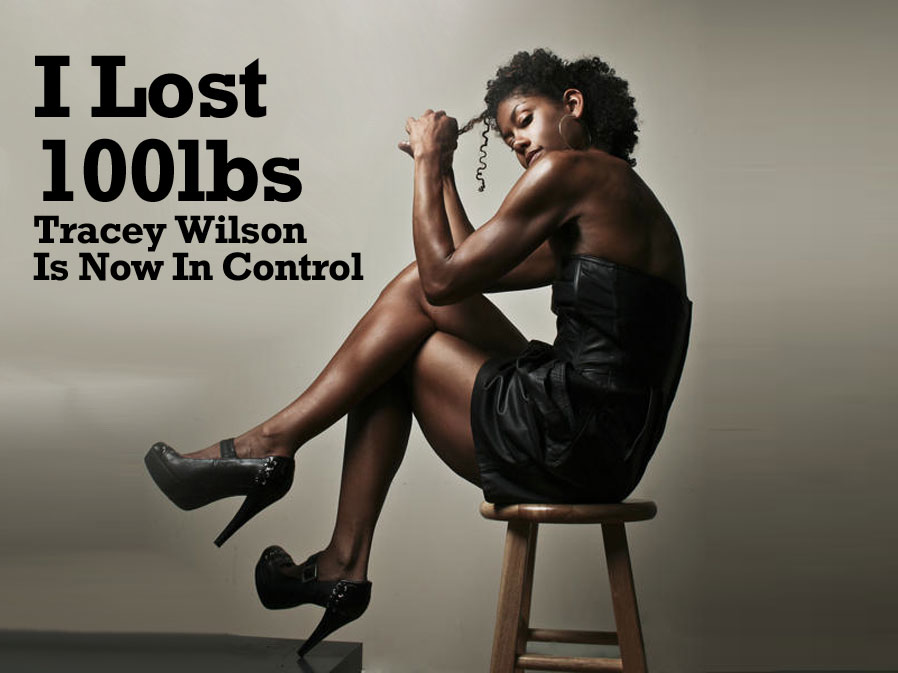 This article was originally published in March of 2011, when I first met Tracey.  Though you’ll find THIS accomplishment incredibly inspiring, who she’s become in the 4 years SINCE this is even more inspiring. She’s gone on to become a highly trained fitness professional who’s passion for helping others radiates. She has also found balance and comfort in being HEALTHY and strong, above having concern for the number on the scale.  This brings us together again, this time with me welcoming Tracey as a valued member of the Eating For Abs team of coaches.

Find out a little about her below.  Join our 1-on-1 Coaching program to work directly with Coach Tracey.

Tracey Wilson has worked her butt off and as a result dropped an astonishing 100 pounds. The journey wasn’t a straight line, she suffered her share of ups and downs. In the process she’s discovered her passion and the warrior inside her.

Tell me about your background. Where are you from, what did you study, and what do you do?
I came to New York City from Florida after graduating from Syracuse University with a Theatre Degree in 2001. After graduating and moving to New York, I pursued a career in acting and became a waitress at a wonderful little Swedish restaurant called Ulrika’s. In 2002, i dropped a significant amount of weight (30 pounds off of a 240 pounds frame) and i loved working out so much and the feeling that it gave me that i got my personal training certification. Since then i have been training off and on plus teaching group classes….

What was your lifestyle like before you made the change?
I have never necessarily been an unhealthy person per se, but i know that i used food as a huge comfort. I started this weight loss journey at a 240 pounds and a size 18-20 which is really a guess because i was too embarrassed to shop for women’s clothing and always wore men’s extra large clothing to hide my size. Like most people who struggle with weight, i have no idea how my weight came on so fast. But it started in high school and let’s be honest I was inactive could power through a couple of bags of chips, wash it down with a soda and then eat a full meal (recipe for disaster!!!). But i still couldnt admit to myself that i had caused this weight gain, I made choices and now i had to deal with those choices. I have basically been struggling with my weight since I was 17, I am now 31 and I am literally in the shape I have dreamed about for so long. Where was my ah-ha moment way back when… Well, I had just graduated high school and moved to New York and hellllloooo subway stairs. Those stairs were a beast to me, I would be huffing and puffing up one flight of stairs at 21 years old!

I have never necessarily been an unhealthy person per se, but I know that I used food as a huge comfort.

What made you want to lose weight? What were the feelings and factors that drove you?
At 21 I felt like i was 61. I had no energy, a horrible self image and was depressed. Every time i took a step i could feel my whole body quake from the extra fat mass and if you have never felt what that is like let me just say it is not a good feeling. I remember the exact moment that i knew i had to lose some weight, I was walking up the stairs from the G Line in Fort Greene in about December of 2001. i was sweating horribly, I was out of breath, and i had to stop at the top of the stairs to gulp the air that my lungs were screaming for. That was it I told myself I am too young to be feeling so absolutely out of shape, so i joined LA weight loss in January of 2002 and received some guidance on my eating habits.

How did you make such a major transformation? What did you do, eat, etc differently?
If i told you every single diet I have been on you would probably throw me into an insane asylum. I literally have tried everything, you name it i have done it. From doing the cardiac rehab diet to raw foods to not eating this and not eating that. Listen i am not perfect I still struggle with finding a complete balance in my diet. Being a big girl and then becoming thinner and fit, you may sometimes look at yourself and that body dysmorphic behavior can still come into play. But i have slowly realized what works for my body and what doesn’t. Do I avoid eating cookies, muffins, chips, cakes, huge sandwiches etc., absolutely. Why? Because of the old adage “a moment on the lips forever on the hips”! Whoever said that is a genius! Because it is true, but please do not get me wrong this girl can eat but i choose to view my food more as fuel and less as a source of comfort.

The secret is taking it back to the basics! Surprise! My menu consists of the following: steak, salmon, eggs, egg whites, lean fish, lean meats, all kinds of vegetables, avocado, coconut milks, protein shakes, any kind of spice and fiber (lots of fiber). Also i have a very strange obsession with mustard and pickles….Do i avoid starchy carbs, like potatoes, rices and pastas you bet but we all know that we should probably not be eating these things and if we do so they should be in super moderation. I eat at least five times a day and during competition season i limit my fruit intake to days when i do heavy weightlifting on my legs. DISCIPLINE AND DETERMINATION IS KEY!

What advice would you give to people who want to make a change in their lives like yours?

I think i can sum it up by saying that you can not change your life until you make the decision to do it yourself. And you can do it, try not to view yourself by what you believe other people are thinking but view yourself how you would like to be.