CC, Tell us about your background. Where are you from?

I’m from West Texas originally. I moved to Gainesville, FL when I was 17 and studied English at the University of Florida. Currently, I live in Southwest Florida and work as a Multimedia Journalist and a Retail Manager. I have two little girls, ages 5 and 3, and am in the tail-end of a divorce. 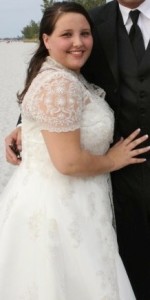 Prior to pregnancy, I was a size 6 and in okay shape – I ran a lot but didn’t great – I was in college so I had a lot of bad habits. I gained a tremendous amount of weight during my first pregnancy – about 70 lb., the last 30 lb.  came in the last month thanks to preeclampsia. After I gave birth, I just never lost most of it – maybe 20 lb. at the most. I stayed home and cooked and ate and snacked and had no idea how to change. Then I got pregnant with my second daughter, gained about 30 lbs. and, again, never lost it.

I made attempts – I joined a gym, saw a personal trainer, but with two little girls and a husband who, at the time, worked 80 hours a week, it seemed almost impossible. Of course, this led to a bit of depression, which just made it even harder. By September 2010, I had lost maybe 10 lb. TOTAL.

I stayed home and cooked and ate and snacked and had no idea how to change.

What made you want to change? What were the feelings and factors that drove you?  What was your big “WHY”?

I had a lot of factors that were driving forces behind my losing 81 lb. First was my divorce – it was like being FREED; suddenly I was HAPPY and that, in and of itself, made a big difference in my attitude towards myself and towards life.  Between October 2010 and February 2011, I lost about 20 lbs.

On February 5th, 2011 I was in a wake-boarding accident that put me in the ICU for two weeks and almost caused me to lose my life. The driver took a turn too fast, I flew out from the side of the boat and before I could even realize what was going to happen, I slammed my upper body into a tree at 40 mph. I had level four bleeding – (level 5 means you are absolutely going to die) internal bleeding from my liver and kidneys, my ribs were broken, my lungs collapsed (and subsequently filled with fluid), my entire body was bruised and broken. I spent two weeks in the ICU away from my children, away from my family. I was in severe pain and I spent a lot of time crying about just wanting to be home. It was during this time that I realized that I don’t really want to spend the rest of my life being fat, being unhealthy, being depressed – I had this epiphany. “Life is precious and it can be taken at any time – why wouldn’t you want to make the absolute best of it?” So, once I was released and given permission to “slowly” begin to exercise, it was ON like Donkey Kong.

It was during this time that I realized that I don’t really want to spend the rest of my life being fat, being unhealthy, being depressed.

Tell everyone what you did, ate, etc differently?

The first thing I started doing was low-impact cardio – I couldn’t run and my lungs were a hot mess so started using the elliptical. I would crank it up to the highest resistance trying to get the toughest workout without compromising my body’s recovery. As my ribs healed and my lungs became proficient again, my doctor gave me the okay to test out higher impact workouts. He stressed that I needed to strengthen my back or my shoulder would continue to give me serious pain for the rest of my life. So, at the gym, I started going to spin classes and I attempted to use the weight machines; I felt like a lost little kid… I had no clue what I was doing, I was too embarrassed to ask someone for help, so eventually I gave that up and ordered P90x. I did the lean version for about two weeks of the first round before my boyfriend basically forced me to switch to the classic version (he’s also a huge driving force behind this – he’s encouraging and helpful and holds me accountable). He even started the program with me. We encourage each other and without him I probably wouldn’t be where I am today.

P90x is still so challenging and I like to watch my progress. There are so many things I can do now that I couldn’t do before, more reps, more weight, I’m not as easily discouraged and I don’t skip any moves like I used to. 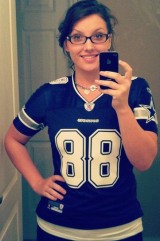 And now food – friend and foe. Food and I have had a less-than-stellar relationship for a long time. I got into bad habits from the very beginning – my mom doesn’t cook and my dad didn’t really for a long time. When I moved to Florida, my dad was frequently working or out of town and when he wasn’t, he certainly didn’t spend any time in the kitchen. We ate a lot of frozen meals, ate out a lot, we almost never went grocery shopping. My dad is a running/biking fanatic so while we spent a lot of time pounding the pavement, we never really nourished our bodies correctly.

When I moved away to college, I took that with me. I ate a lot of crap, whatever was easily available and it wasn’t until I had children that I began to focus on learning how to cook. So while our meals were relatively healthy (sometimes I craved, being from Texas and all, chicken fried steak), I spent a lot of time snacking without even realizing it… chips, soda, goldfish, cheese, whatever. When I started working out, I also incorporated a serious effort to revise what I put into my body – I stopped drinking soda immediately and eventually gave up coffee (only because I can’t drink it black and I’m positive all that milk and pumpkin syrup is not the greatest). I no longer snack on processed foods – in fact, we rarely have any in the house. 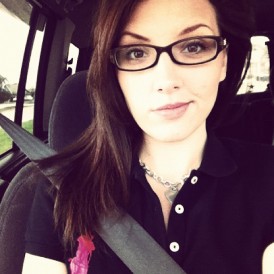 What advice would you give people who want to change their lives like yours through E4A?

It has to honestly be a life-long commitment. Crash diets, crazy machines that shake your body around while you just stand there, “fat melting laser pulses”, cellulite-reducing hot pants… if it were that easy, the entire world would be thin but we’re not, especially in the States where the average women’s pant size is a 14. We’re not thin, we’re not healthy, we don’t eat well, we don’t take care of our bodies, we stress constantly. We live in a world where it’s cheaper to eat frozen, processed foods than it is to eat things that grow naturally. The BEST thing you can do for yourself is to start taking care of yourself – make a lifestyle change. Believe in yourself, find the inner strength and start; form good habits, make small changes, challenge yourself. And get support – a husband, a friend, and a professional (like via The Ultimate Nutrition Course!). I had, and still have, big goals and without someone there to support me and encourage me, this road would’ve been a lot harder and a lot longer.