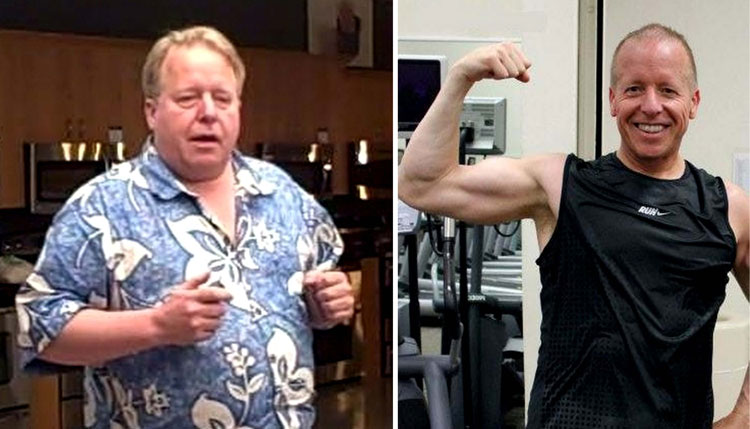 “I’m either going to die, or I’m going to do something.”

Eric O’Grey’s story has been circling the internet for a while now, but it’s told best by him, here in video. Eric found himself in an unhealthy, unhappy way, and thanks to an insensitive remark by a fellow traveler on a flight, he recognized that he needed to make a change.

“So I looked in the phone book and found a nutritionist near me and the first thing she told me to do was to adopt a rescue dog.”

He changed his diet, one step at a time and he and Peety began walking. Before long his entire life changed.

Eric’s story is inspiring, and progress like his is totally accessible to others. When you’re, or someone you love is ready to finally achieve lasting progress in health, body composition, weight, and happiness, join us.

What we can do for you:

In 2010 at age 51, I was 330 pounds at 5’10”, my waist was 52 inches, and I wore 4XL shirts. I had Type 2 diabetes, my total cholesterol was over 300, and my blood pressure was 160/100. I had tried and failed with every diet plan, diet book, and diet gimmick ever marketed for weight loss in the U.S. I was taking over $1000 in medications per month, including insulin, statins, and medications intended to mitigate the side effects of other medications. My doctor told me to purchase a cemetery plot, because I would likely need one in the next five years.

As a last ditch effort to avoid bariatric surgery, I consulted with Dr. Preeti Kulkarni, a plant-based naturopathic doctor, who advised me to rescue a dog from a local shelter. In addition to following my doctor’s advice and switching to a whole foods, plant-based diet, I called Humane Society Silicon Valley and asked to adopt an obese, middle-aged dog so we would have something in common. And that’s how I met Peety, the 7-year-old dog who rescued me.

Over the next year, my weight dropped to 180 pounds, my waist is now 33 inches, and I wear a size medium shirt. My type 2 diabetes and all my other health problems were reversed, and I no longer take any medications. Today I am 56, but feel like I’m 25, and I’ve sustained my results for 5 years.